skip to main | skip to sidebar

This is the harvest from yesterday! Everything in this basket I pulled out of our ever growing 'farm' when I wandered out there before anyone else was up. 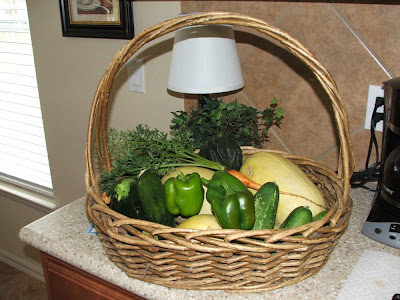 The basket, I just got from Goodwill on Friday for $3.99. It's huge and just what we need cos all this stuff weighs a pretty ton, most especially the spaghetti squash. I will probably be handing a lot of this out to our neighbors as we still have zucchini, cucumbers and spaghetti squash to cook from earlier last week.

Today I made some zucchini bread (hubby's favorite) which I'll post about tomorrow on my daily blog and feature also in my cooking blog with the recipe and pictures.

Things continue to grow well for us, and we're getting ready to plant more seeds for the Fall season. There are different veggies we can grow in the cooler months, like broccoli, onions, lettuce and peas. These don't do well in the hot summer months and we didn't get a chance to plant any in the early spring so I'm looking forward to trying them soon.

I'll leave you with a 'birds-eye' view of our 'little farm' taken from the upstairs game room last week. My daily blog will let you know when I update in here. It may only be once or twice a week. 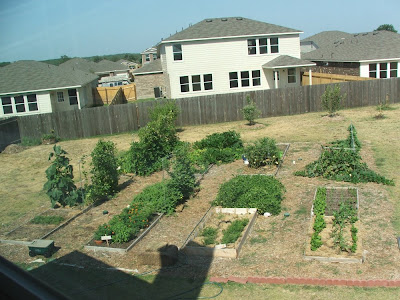 We are in the habit of popping out to the 'Farm' each morning to see what we can harvest. Here is my basket of goodies from today. . . 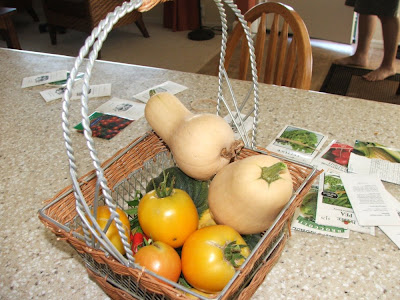 I'll show you them indivudually. Here's the butternut squash. . . 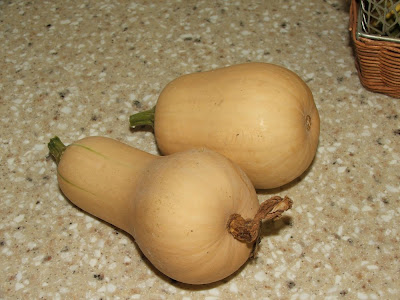 These seem very small compared to what I see in the supermarkets, but I didn't want to leave them too long and have them go bad. I think I will try to make a small batch of our favorite butternut squash soup today. I'll let you know how it turns out.

These are the Acorn Squash, again quite small compared to store bought. To be honest I've never bought Acorn Squash, but I saw them in the store yesterday and realized they do indeed stay green, they're just a little larger than ours. When I saw ours was starting to turn a little yellow, and had been green for a couple of weeks now, I decided to harvest them also. I'll have to look for a recipe for these as I have no idea what to do with them! 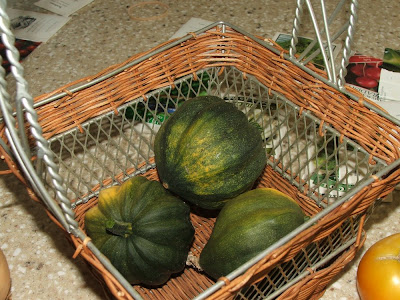 Here's some little chili peppers that have finally turned red and are a little longer than most of the ones left on the plant! Again, don't know what I will do with them though. . . 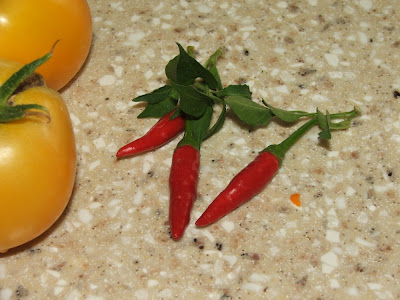 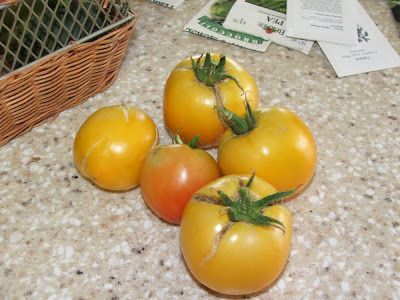 See what I mean about the skins splitting? There I was waiting for these to turn even redder, when I double checked their label - they are called 'Golden Boys'! They don't turn red, they go orange! So, despite the fact that they didn't look ripe enough to me, I harvested some the other day and got a really lovely surprise. These 'guys' are the most sweetest and juiciest tomatoes I've ever had. I wish you could try them! Jason is even eating them on his salad, and he hates fresh tomatoes! He says it's different when 'they're your own' ;-)

And finally. . . cucumbers! We are starting to realize that we don't need to plant as many cucumber plants as we have this year. We seriously can't eat them fast enough, and I've already given a ton away! Here's the pile in the kitchen from the past couple of days. . . 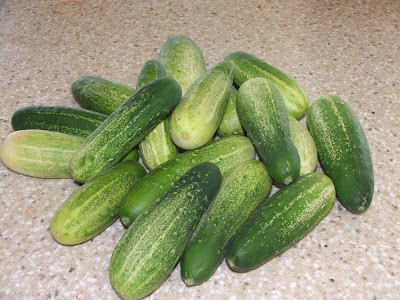 I've also pickled some already, and we're waiting to see what they turn out like, before we decided if we want to do more (of course not with these guys as they won't be that fresh by then!). These guys are going in to the office with Jason today!

Yesterday, I was busy in the kitchen'cooking up a storm'.It's book club at my house tonight and we've been reading (my pick), Pomegranate Soup by Marsha Mehran. I've actually made the pomegranate soup that the book gives the recipe for, and also some Baklava (again from the book). Surprisingly the soup is rather tasty. I'll take pictures tonight when I set everything out for my guests. I think you've got enough photos today to keep you happy ;-)
Mood girls by Mulberry Street Graphics (no longer on line)
Posted by Denise at 1:42 PM No comments:

Denise
I am...a Wife, a Mom, A Sister, a Friend, an Aunt, a Lover of Puppies, a Knitter, a Wine Drinker, a Bookaholic, a Beachbody Coach.... I AM SAVED. 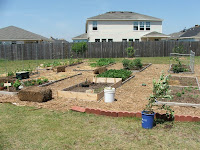 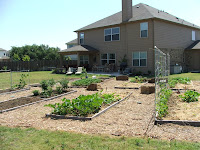 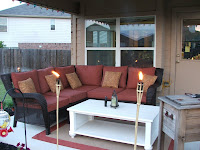 Thank you to my dear friend Judy for the sweet graphic she made for me... featuring our precious boy Boo :-)

'Den' girls by Mulberry St Graphics
(no longer on line)